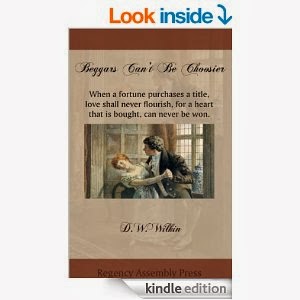 
This was the most delightfully unique Regency I’ve read in years.  It was like being tucked in the corner of a drawing room and observing the lives of friends.  The emerging tenderness between Katherine and Brian provides affirmation of both an intense intimate life but also, as both characters acknowledge, an emotional and mental accord that twines between them like ivy on a cottage.  The book is entirely free of the recent trend in romances to hurl the hero and heroine into adversarial straightjackets so the resolution is a strain to declare a happy ending.  However, this is no two dimensional facsimile of the hay-day of Regency publishing either.
Katherine is a formidable woman, made so by life, her own will and her late father’s fortune.  She is not crusading or rebelling; she desires to be something more than expectations might grant and is determined to do so in a way society will accept.   Shunned by a family unknown to her and then the society of India where her father had not only made his fortune but also a difference, Katherine understands the narrow paths allowed to her and though there are moments she frets, she does not falter.  She plans, prepares and progresses without becoming an anti-heroine, more than once I found myself thinking:  Yes, that’s how it was done.
Brian is equally formidable with enough genuine humility to prevent him from being a Beta Hero.  In a wonderful turn of the tables, we observe the man economizing and stretching every penny to keep soles on his shoes.  The details of a man’s existence are just the right amount of fact and reflection without bogging you down.  Even better, Brian does not turn to the gambling hells, wild speculation or indifference while raking his way through the muslin company.  He genuinely cares for others and their good opinion of him does matter.  It was refreshing to find a group of male friends not based on school or some gruesome trial of life but because they enjoyed each other’s company.  He is a man to be admired and Katherine not only sees this, she acknowledges it in the most forthright manner.
Both are resolved to survive without violating their honor or the rules of society they are glad to dwell in even as the work to change it for the better, not just for themselves but others as well.  Her blunt proposal nearly knocks those re-soled shoes off his feet and from then on, you sit on the edge of your seat waiting for the explosion that never actually comes, except in the matter of life common to all mankind.  Well, all right, that and a few ironic twists of fate that can only be found in fiction.  You are not the least sorry to skip the fireworks of misunderstandings and foolishness so common in this genre.  These characters are too well-educated from their years of deprivation.  It is a glorious treat to have characters that have actually learned and willingly applied those lessons from the life they’ve lived. It is even better that when they make stupid mistakes, they don’t give up; they keep trying until matters are once more as they should be.
I could easily see this as a weekly installment such as Gaskell’s work.  But instead of the over blow cliff hanger required by the press of the time, our author leaves us with the subtle anticipation ending each chapter so you do in fact pause and savor before turning the digital page. It is not written in a faux historical style but the flavor of each word is crisply intended to provoke the tone of the era.  I was not shocked to discover at the end of this wonderful read that D. W. Wilkins is a mister, only surprised.   I did laugh at myself for making notes about the masculine detail that was charming and the lack of endless feminine wardrobe descriptions that was a precious gift.  The romance was as delicately handled as the historical details and I confess to a sigh or two as I read.  This is definitely a *keeper* for my bookshelf.
If you are looking for a Classic Regency with characters that you genuinely empathize with while enjoying their foibles and falderal, this is a book I earnestly recommend.