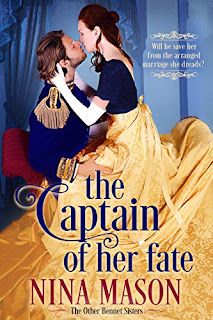 Book's Premise:
Captain Theobald Raynalds lost his leg at the Battle of Trafalgar and with it, his belief any woman could find a cripple like him unobjectionable enough to love.
Louisa Bennet finds Theo incredibly attractive—both as a man in his own right and as an alternative to the odious cousin her heartless father has arranged for her to marry.
First, however, she must convince the Captain her interest in him stems from the man he is, scars and all, and not on his being the lesser of evils...


Foremost and not least, The Captain of Her Fate came to my Kindle for an honest review. While I have no experience of previous books by this author I very much liked the author's credible expertise for her sharp, focused, plot driven narrative. The author drives the hero and the heroine on at a fast parallel course too, their inner desires and dreams hopelessly incompatible - as crossed my mind at first. Alas, inner pain, humiliations, and rejections of one sort or another hound their thoughts. All in all tension and desire builds nicely between them. But in getting ahead of the story, I must back-peddle to Louisa Bennet, who is seeking a way out of marriage to a hateful cousin.


Immediately on *news* of Captain Raynolds arrival in Derbyshire the poor man, is as a good as any man if Louisa can trap him to save her pretty neck. Nothing does she know of his circumstances and Louisa is not at all slow in offering herself up to the handsome captain, as she might have to any other man who leased Greystone Hall. The captain I thought was rather too nice for the likes of Louisa, and I can’t say I liked her all that much to begin with. However, my opinion of her improved as time went on, and to say more will spoil a story laced with unrequited love; imminent forced marriage; a good many shocking family secrets; family abduction; elopement to Gretna Green; and all sprinkled with a little coarse spicy language and hot sex in places.


Throughout this fast paced novel quotes and passages from Jane Austen’s tomes add delightful insights to the minds of fanciful misses who compared themselves and others with characters in romance novels. Though one notable incident seemed unlikely at best and I couldn’t envisage any ex naval officer retelling a case of near sodomy to his lady love. Add to that several research mishaps the author may want to revise. Footmen and gentlemen of the Regency didn’t wear 18th century Periwigs which impressed upon me the author is unfamiliar with Georgian England and the Regency era in particular. Perchance the mistakes were an oversight hence Tailcoats and Peruke wigs escaped her research notes.

Amazon
Posted by Charlotte Bream at 15:13