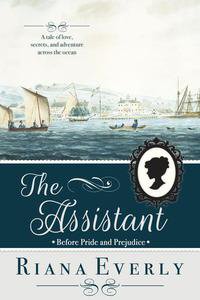 
When a Pride & Prejudice prequel is as good as the original, then indeed the author has excelled in the medium of writing, and Riana Everly does just that with this novel. Her rendition of young Mr. Gardiner in the prime of youth and on his trading travels to Derbyshire, is delightful.

His story begins with an opening more akin to Charles Dickens than Jane Austen. Given the instance of a boy in distress young Gardiner displays a heart of gold, and is well accustomed to paying witness to the harsher side of life in the less salubrious districts of London. Although Gardiner has an eye to quality of cloth there is a sense of naivety about him in other matters. He quite simply takes people and things at face value and believes almost every word thus uttered, until suddenly events become confusing and he puzzles the strange antics of his newly acquired waif-cum-assistant.

On the flipside, Mr. Gardiner’s employment of the waif has provided a place of safety, and more besides. But when one has lied and masqueraded as other, then a day of reckoning will inevitably dawn, and owning to dishonesty is not always as straightforward as might be imagined. Whilst words of affection expressed on paper warmed the cockles of Gardiner’s smitten heart, the outcome of truthful honesty turns to one of shame and guilt and disbelief for him. How could he have been so foolish, and what-if?  And here I shall pause, for to tell more would spoil the plot, except to say the Dickens opening gradually melds into Austen as familiar faces from Pride & Prejudice step centre stage, and Georgian England comes alive. Here I shall end with the words, Pure Escapism at its best!